Tax season 2015 had a new item for tax preparers to check off- does the taxpayer have health insurance?  With the new ACA laws, taxpayers faced a penalty for remaining uninsured.  However, 6.6 million people paid the penalty, which was 10% higher than the IRS anticipated.  That increase includes a portion of tax payers who didn’t need to pay the penalty, either because their income was low enough to exempt them from it or simply because they paid it in error.  The estimated total number of tax payers who unnecessarily paid the penalty is 300,000 individuals, and with the average penalty coming in at $190, they overpaid an estimated $35 million.

Without a professional and trusted tax preparer, taxpayers run the risk of not only losing out on deductions that they qualify for, but they also could pay penalties and taxes that they do not owe.  If you think you unnecessarily paid the ACA penalty, give Wentworth and Associates a call at (570) 430-8082 and we can review your tax return. Our mission is to make sure your taxes are done correctly and timely, so you can keep the money that belongs to you.

To read the entire article at Bloomberg.com, click here.

The Rise of China: Are There Benefits?

As a business owner, it is important to stay informed about our national politics and economic news as well as international affairs.  Lately, we’ve been hearing a lot about Greece and China, and there are a few sources who point out the investment opportunities that lie admits the many known challenges we’re facing.

An article from Edward Jones points out that China’s role in the global world and global market has been increasing steadily over past decades, as it becomes the world’s second largest equity market and economy.  Interestingly enough, China is considered a “developing market”, not a “developed market”- but it is no stranger to being the largest market in the world.  In the 1800’s, it was the dominating market for centuries.

As China continues to grow and become wealthier, Edward Jones believed we can look for Chinese consumers to keep shopping while demanding cleaner air, better working conditions and greater freedom.

Below is a chart and excerpt from the Edward Jones article, that delves deeper into the benefits and challenges that investors will face as China’s economy grows and positions itself to possibly become the dominant economy. 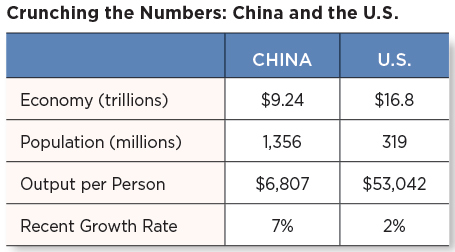 “China’s Challenges Today
China’s growth rate has slowed to less than 7% this year. While that’s strong growth, the country still faces challenges, including:

Policymakers have taken numerous steps to combat slower growth, including lowering interest rates. Since the government continues to have a great deal of control over the economy, we think it can manage these challenges during the transition to slower growth.
A Long Way to Go
As it grows bigger and wealthier, China is also playing an increasingly important role in world economic and political affairs. It wants to flex its newfound muscles in various ways. However, remember that China is still a developing country with many obstacles. That’s why we think a lot of the fears about China are overblown.

China is taking steps for its currency, the yuan, to have a larger role in global finance. One goal is to have the International Monetary Fund (IMF) recognize the yuan as a reserve currency, which may occur later this year. But we believe that won’t have much impact on the dollar. According to the IMF, about 80% of world trade is in dollars, and while the yuan is the second most-used currency at about 9%, the euro is close behind.

In addition, we don’t believe increasing the yuan’s use should have much impact on the value of the dollar, which changes in response to economic conditions here and abroad. Over the past year, the dollar has risen sharply compared to most other currencies because the U.S. economy is relatively strong, while China limits changes in the yuan’s value. Over time, as China removes restrictions, we expect the country and its currency to have a bigger role in international finance. But China still has a long way to go.

What Should You Do?
Many investors may have benefited indirectly from the growth of China and its consumers. Despite its progress, we still don’t recommend investing directly in China by buying Chinese stocks because of concerns about the government’s control of the economy and markets, as well as regulatory and legal structures. But don’t let fears about China’s size or role in the world keep you from investing internationally and domestically – you may miss opportunities that are right for you. In our view, an appropriate mix of stocks, bonds and international equity investments can help keep you on track toward your goals, regardless of what happens in China.”